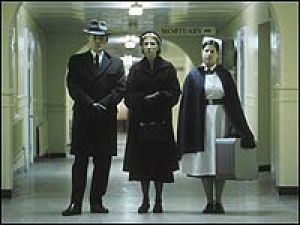 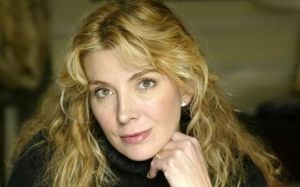 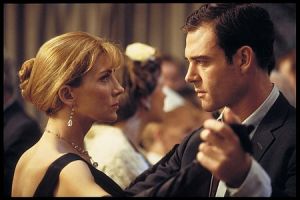 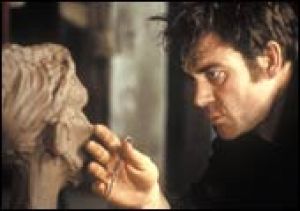 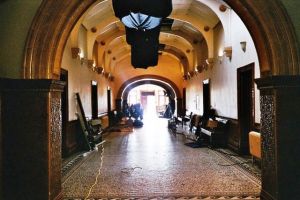 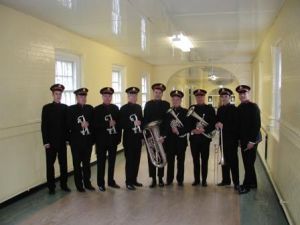 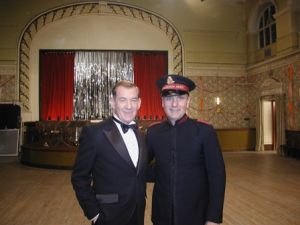 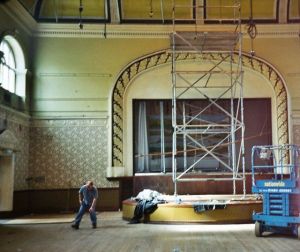 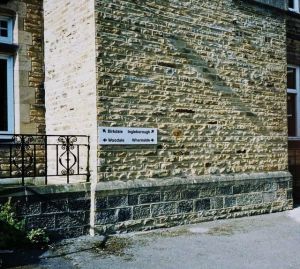 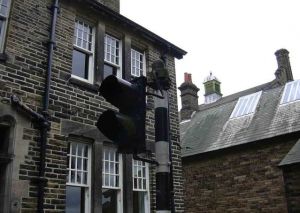 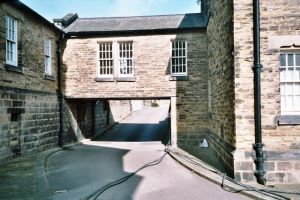 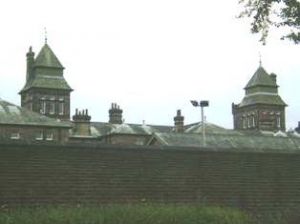 Shown are pictures of the filmset paraphernalia used in theParamountproduction ‘Asylum’ made on location at High Royds. An example being the vintage car, a prop shown at the rear of the building and the camera and lights scaffolding in the ballroom.

Asylum Trailer Asylum is the story of the bored and unfulfilled wife of a psychiatrist working at a remote mental asylum (in Britain the very early 1960s), who starts a passionate but dangerous affair with one of the inmates, a jealous psychopath.

At first Stella is beguiled by the new world of passion and unchartered lust Edgar introduces her to and the pair manage to keep their affair secret from the mental asylum officials until Edgar can take it no more and breaks out of the asylum.

Stella attempts to continue life without her lover, playing mother to her son, Charlie and wife to her husband, Max. She pays Edgar occasional visits, telling her husband she is shopping, but she soon realises that she is unable to continue doing this and if she wants to be with Edgar, she must sacrifice her family to do so.

She runs away to join him, brashly and without thought one day, and herself and Edgar begin a loose, somewhat bohemian life together, remaining out of the public eye for fear of police and Edgar being forced to return to the asylum.

Dr. Cleave (Ian McKellen), who is fixated with Stella himself, also takes a personal interest in finding the couple. Soon, the lust of the relationship begins to wear off and Stella begins to see a darker side to Edgar’s personality. He starts to become aggressive and violent both towards her and to friends and Stella begins to live in fear of him.

After shopping one day, Stella returns to the pair’s squalid studio flat to be found by police and taken back to her husband and son. Her husband struggles to forgive her but accepts that Charlie, their son, needs a mother figure and that Stella can care for him.

Edgar observes Stella’s capture from the shadows and flees. Stella struggles to settle back into ‘normal’ life with her family and often daydreams and fantasises of what life could be like if she was still with Edgar. A brief meeting with Edgar results in his capture and this sends Stella further into her thrown, distracted state.

On a school outing with Charlie, some weeks later, Stella takes her son away from the class teacher and other children and they go into the woods together. Stella perches herself upon a rock while Charlie searches for fish in the river. He suddenly loses his footing, falling into the river and begins to drown. Not noticing, Stella remains in a trance, not moving to help him. The class teacher arrives and attempts to help him, but Charlie is already dead.

Stella is anguished over this and following this trauma, her husband and Dr. Cleave decide that she needs to be institutionalised. Her husband cannot forgive her for this. She is taken to the same asylum she met Edgar at and where, though she does not know this, he is currently being held. With the help of constant medication and care, Stella gets ‘better’, though she never fully recovers.

She accepts Dr. Cleave’s offer of a stable relationship, much to his delight. At the annual ball, where male and female inmates are permitted to socialise, Stella wears the same dress she wore on the night her and Edgar shared their first dance.

She is anxious to share another dance with Edgar and desperately looks forward to seeing him. Unbeknown to her, Dr. Cleave cannot resist gloating to Edgar about his relationship with Stella and forbids Edgar from attending the ball. After waiting in vain for Edgar to appear, Stella accepts a dance with Dr. Cleave, inquiring as to where Edgar is. Dr. Cleave informs her that Edgar will not be attending.

As a nurse escorts patients back to their rooms, Stella sneaks off up a stairway leading to the roof. Before anyone notices she has gone missing, she throws herself off the roof tower but does not die as she intends.

Dr. Cleave rushes to her aid but she rejects his help and he steps away from her, allowing her to die from her injuries.

I was in the Asylum film playing the tuba with a group from the Lindley band. It was quite an eye opener to see what it was like inside. Quite a grand entrance, almost like an entrance to a higher education academic centre. What lies behind is quite scary.

My changing room was one of the cells. just enough room to get a bed and a chair in, but nothing else. The only barred window was above the door.  I’m glad I never had to go in a hospital like that.

Where we recorded the soundtrack was in a little room with a drain in the middle and a hose on the wall. I can only guess what that was for and I bet it wasn’t pleasant.

Natasha Richardson, who has died aged 45 in New York after being injured in a skiing accident in Canada, was born into one of Britain’s most powerful thespian dynasties and, although she became a star in her own right, often felt haunted by her pedigree.

Natasha Jane Richardson was born in London on May 11 1963 and landed her first role at the age of four, when she played her mother’s bridesmaid in The Charge of the Light Brigade, directed by her father. But life at home was far from idyllic. When she was three, and her sister Joely one, their parents divorced. Later she recalled thinking that if she saved up all her pocket money and sent her mother red roses from her father, it would get them back together again. After the split the two girls spent school holidays between their mother’s semi-detached London home and Le Nid du Duc, their father’s rambling estate in Provence.

Vanessa Redgrave, meanwhile, became increasingly involved in extreme Left-wing politics, leaving Natasha to fend off barbed remarks in the playground. By the time Natasha was nine her mother had donated so much of her earnings to the Workers’ Revolutionary Party that they had to move to a smaller house in a less salubrious area of London.

The chaotic nature of family life led Natasha to assume many of the family’s domestic responsibilities. Armed with a Brownies cookery badge, she kept house in London and, on visits to her father, would sometimes cook for parties of 15 or 20. “I was a caretaker for other people,” she recalled. “I loaded myself with responsibility, I grew up probably too soon and was… very boring and middle-aged as a teenager.”

Natasha was closer to her father, and it was he who insisted that she should be educated not at the local comprehensive but at the French Lycée and at St Paul’s Girls’ School. When she was 11, however, she found out that he was bisexual. At the time she was upset, “because of the social stigma”, though it soon ceased to be a problem. When he died of an Aids-related illness in 1991 she was grief-stricken.

As a child, Natasha channelled her unhappiness into comfort eating and, though she was never obese, she was overweight, a fact that blighted her adolescence. She did not shed the excess pounds until she was in her early twenties, and throughout her career she had a tendency to balloon in weight. She fortified her willpower with cigarettes and Diet Coke.

Despite all her insecurities, by the time she arrived at St Paul’s, Natasha had already set her heart on becoming an actress, and at the age of 17 she auditioned for the Central School of Speech and Drama without admitting that she was a Redgrave. She honed her skills in repertory in Leeds and made her screen debut in Every Picture Tells a Story in 1984.

She starred opposite Kenneth Branagh and Colin Firth in A Month in the Country (1987), directed by Pat O’Connor, and her role in Ken Russell’sGothic had got her noticed by the director Paul Schrader, who offered her her first big American feature film, Patty Hearst (1988). There followed The Comfort of Strangers (1990, and also by Schrader); Fat Man and Little Boy (1989), about the making of the atom bomb; and The Handmaid’s Tale (1990), in which she played opposite Robert Duvall and Faye Dunaway. But she struggled to assert her own identity.

In his memoirs, Tony Richardson recalled her performance in The Seagull, noting that she had “the same quality of being able to communicate emotion and let emotion flow through fully and directly that her mother has” – a constant theme of reviews.

During The Seagull‘s West End run she had fallen in love with the play’s producer, Robert Fox, 11 years her senior, whom she eventually married in 1990. The same year she won a London Theatre Critics’ Award for her work in Eugene O’Neill’s Anna Christie. When a Broadway production was planned, Natasha Richardson suggested the Irish actor Liam Neeson to be her co-star.

In 1992 she divorced Fox, moved to New York and subsequently followed Neeson to Poland while he filmed Schindler’s List. They appeared together with Jodie Foster in Michael Apted’s Nell (1994) and married later the same year. Fox was so devastated that he later spoke in public of his grief.

The crisis in Natasha Richardson’s love life came at a fortuitous time, for she was finding the constant comparisons with her mother increasingly irksome. “In New York I could be me,” she said. “I could be my own person. I was appreciated for who I was and I felt a great sense of freedom.” The move to New York enabled her to build her reputation on Broadway, where her other credits included A Streetcar Named Desire(in which she played Blanche DuBois) and Patrick Marber’s Closer, in which she was Anna.

In 2005 Natasha Richardson was executive producer and star of Asylum, a film based on the novel by Patrick McGrath, in which she played the bored and unfulfilled wife of a psychiatrist in a mental asylum who starts a passionate but dangerous affair with one of the inmates.

Natasha Richardson always remained close to her family, and her years in the United States, where she took full citizenship, seemed to have freed her from their shadow. In 2005 she played a Russian countess who is drawn towards Ralph Fiennes’s blind former American diplomat in the Merchant Ivory film The White Countess, which also starred her mother and her aunt, Lynn Redgrave. In Evening (2007) she appeared with her mother as a middle-aged daughter coming to terms with her mother’s imminent death.

In 2005 she returned to London to play the unhappily married Ellida Wangel in Trevor Nunn’s production of Ibsen’s Lady From the Sea – a role famously played by her mother.

Natasha Richardson is survived by Liam Neeson and their two sons.