The block (Pavillion) to the left of admin incorporating Denton, Clifton, Beamsley and Langbar was used as the “Bodies” Filmset. 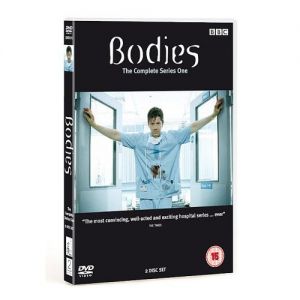 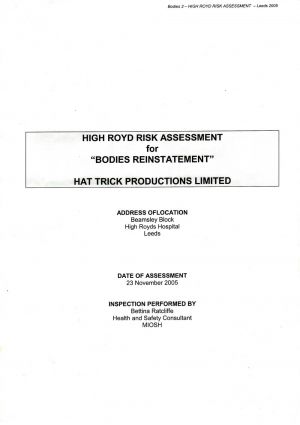 This block differs greatly from other blocks in that it is devoid of the standard water towers, a landmark at High Royds. The block was modernised in the sixties, originally the building would have mirrored the female block Aysgarth, Ramsgill, hawes located to the right of admin.

High Royds is all set for more TV drama

A former psychiatric hospital is finding TV fame featuring in a whole series of dramas.

High Royds at Menston is becoming a regular sight on the small screen – not to mention the silver screen – as film crews queue up to use the location.

The impressive Victorian building has already featured in Heartbeat and the Para-mount Pictures film Asylum.

Now it is forming the backdrop to the new Channel 4 medical drama No Angels.

And even as viewers are watching that series filming is going on for another hospital drama, Bodies.

The dramatic gothic building is no longer used as a hospital, and the 200-acre site has been earmarked to become a village of 500 homes by developers The Raven Group.

But the heart of the Victorian hospital will be preserved in all its splendour as part of the scheme.

Developer Ben Krauze said the popularity of the location among film crews was testament to the architecture’s grandeur.

He said: “The site is very impressive and we’ve had many, many calls from film companies interested in using it as a location which shows how valuable the buildings are.”

Meanwhile film crews will be on location until May making Bodies, which will be screened on BBC Two and BBC Three later this year.

The drama, which is being made by Hat Trick Prod-uctions, has a star studded cast including Patrick Baladi, who plays area manager Neil in the hit comedy The Office, and Max Beesley, who starred in The History of Tom Jones.

It also features Keith Allen, who was the dead tenant in Shallow Grave, and Preeya Kalidas, of Bombay Dreams and Bend It Like Beckham fame.

Created by writer-producer Jed Mercurio, Bodies shows the dark side of medical life and has been dubbed the ultimate antidote to hospital drama.

“It also dares to go where other medical dramas haven’t gone, into the culture of malpractice, whistle-blowing, cover-ups, star-ratings and government targets.”

Bodies is a BAFTA-nominated British television medical drama produced by Hat Trick Productions for the BBC. Created by Jed Mercurio, the series began in 2004 and is based on his book Bodies. The first series debuted on BBC Three as the channel at this time was trying to break out into hour-long dramas. The first series soon made the move to a terrestrial channel as BBC Two aired it in the late 2004. With end of the first series left open-ended, BBC Three and BBC Two co-commissioned a second series, increasing the number of episodes from six to ten.

BBC Two debuted the second series in September 2005 with BBC Three airing the next episode straight after the episode on BBC Two. Despite widespread critical acclaim, the BBC axed the drama after the second series because of declining viewing figures.

After the second series ended, Max Beesley told BBC Radio 1’s The Chris Moyles Show that an additional one or two episodes were being planned to conclude the series. The drama has been described as a “dark, sometimes funny” take on the favourite genre made popular through shows such as Casualty andHolbyCity.

The series, starring Max Beesley, Keith Allen and Patrick Baladi has developed a cult following with its gritty storylines and gruesome theatre scenes. The series was also broadcast to American audiences on digital channel BBC America during the late summer/early autumn of 2005.

The last episode was broadcast on 13 December 2006 on BBC Three.

which incolved a weeks shooting at High Royds. My wife said it was a very