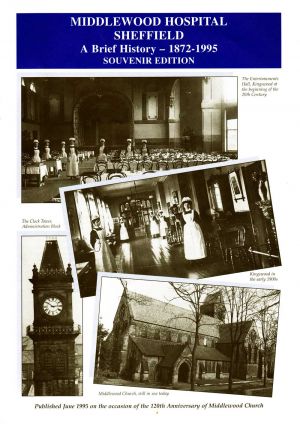 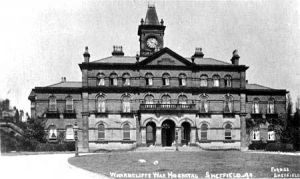 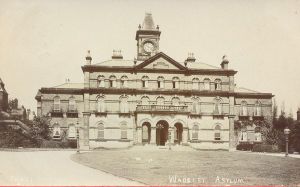 The Four Hospitals of the West Riding General Asylums Committee, later known as the Mental Hospitals Board:-

Long before the County Asylums Act of 1808, the Justices of the Peace had played an important role in arranging for the care of the insane poor. Under the Poor Law Act of 1601, they organised, with the help of parish officers, a system of poor relief including the care of those insane persons unable to work and a danger to themselves and others. It naturally fell to the county magistrates to manage, as well as to establish public asylums, with supervision from the Commissioners in Lunacy who made regular visits of inspection.

Many public asylums were constucted during the middle of the nineteenth century and considerable improvements were made in their design and facilities. The use of mechanical restraints for the violent patients, and loose straw beds for the incontinent, had gradually been abolished.

In the summer of 1869, building operations for the construction of the South Yorkshire Asylum at Wadsley began, and Lord Wharncliffe announced that the plans had been approved by the Secretary of State, the number of beds to be 750. Work progressed steadily until it was completed at the end of 1871.

Building plans followed the approved design for the accommodation of patients at that time, with two large three-storey blocks, males in the north wing and females in the south wing. The central administrative block contained senior staff quarters, the main dining hall for patients, the kitchens and administrative offices. The bakery and brewery were nearby.

Wards were large and connecting corridors reduced to a minimum. Sick and infirm patients were to be housed on the ground floor, the middle floors were arranged as day rooms for the ambulant and the top floor as dormitories. Additional facilities in separate buildings included the laundry and workshops for upholstery, carpentry, plumbing, book-binding etc.

A storage reservoir holding 800.000 gallons of water was constructed on the highest part of the estate, and after completing a mortuary and post-mortem rioom, the hospital was ready for use. Total cost incurred in the provision of the site, building and furnishing was £150,774.

In August 1872 the South Yorkshire Lunatic Asylum was declared open for the reception of patients and a small group of seven were admitted – the first to be transferred from Wakefield Asylum. The Asylum was described in the Press as one of the most imposing structures near Sheffield, half-way between Wadsley and Oughtibridge. Middlewood was then little more than a country village beyond Hillsborough, the main road towards the asylum passing through farms and open fields, with a few cottages here and there. Visiting patients was not easy; Wadsley Bridge railway station was some distance away, and the alternative was horse drawn omnibus to Owlerton, and then pony and trap. Patients could only be visited once a month.

The new building was felt to be vastly superior to any asylums that had previously been built. Dr (later Sir fames) Crichton Browne, the Medical Superintendent of the Wakefield Asylum made suggestions as to the technical details. Dr Browne gathered a galaxy of research talent at Wakefield and many investigations were made to discover a cerebral pathology of mental disease. The results were published in six volumes from 1871-75 and a continuation of the work established Wakefield as one of the most active research centres of the 19th Century.

The firstMedical Superintendent of the new asylum was Dr Samuel Mitchell who transferred from Wakefield.

Originally the hospital was known as South Yorkshire Asylum (1872-1890) It then became West Riding Asylum, Wadsley (1890-1930) apart from a couple of years from 1915 onwards when the hospital was evacuated by the military to be used as Wharncliffe War Hospital.From 1930 the hospital became Wadsley Mental hospital and remained so until 1939 when 2,200 patients were evacuated so that the hospital could once again be used as a war hospital.

After the military had finished with it, the hospital again became Wadsley mental hospital until 1948 when it became Middlewood hospital.

Not all the original inmates of the hospital were lunatics, some were paupers from the workhouses who were no longer able to work, some were women suffering from post-natal depression and some were suffering from things like epilepsy.

This tremendous building boasts many ghost stories, a famous one being the ‘Old Lady’ who is known to wander around the old ward eight, where she would disappear through walls. There are also numerous accounts of disembodied footsteps on stairways.

There are many, many other stories such as general hauntings on Ward 12, Ward 8, sightings of an old woman in a night cap and no face, and the Hillside ward suffering from knockings at night time. Prior to the renovation of the wards they were said to be excorcised and various students through the years have reported the hospital being excorcised by the on site priest.