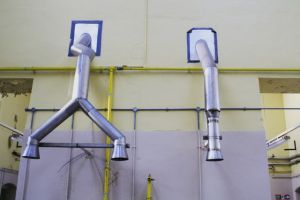 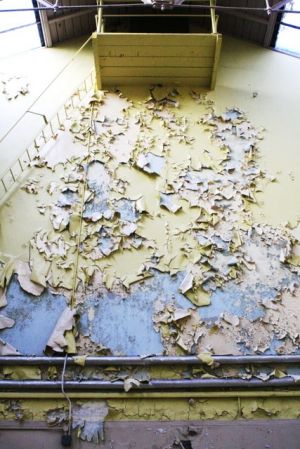 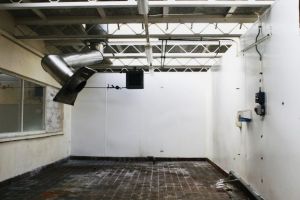 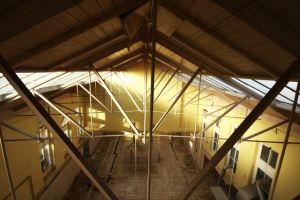 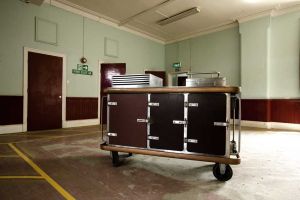 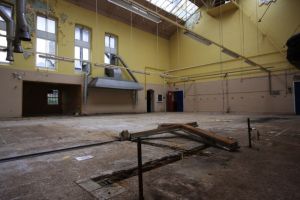 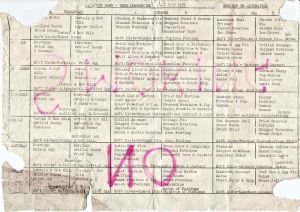 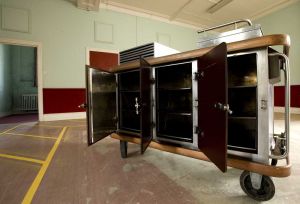 In the Victorian and early years of the asylum, life was strictly regimented and mealtimes were no exception to this.

A commisioners report into typical daily life at such an institution noted that the patients who were dressed alike in grey cloth rose at 6am in summer and 7am in winter.

They breakfasted at 8.30 on milk and pottage. At eleven the workers have a luncheon of bread and three qurters of a pint of table beer.

They dine at one o’clock. Their dinners are one day meat, yeast, potatoes and dumplings with half a pint of table beer. The next day soup, potatoes, dumplings and beer alternately.

At four, luncheon is served similar to that of the forenoon. At seven supper is served of milk, pottage and bread.

At eight o’clock the bedroom doors and shutters are carefully locked, the clothes folded and left neatly outside the doors.

A far cry I am certain, from the varieties no doubt prepared when the kitchens shown as they are today were used for the last supper.

Many thanks to ex member of staff Andy Plant, for sending us the following information:-

The ‘kitchen room’ pictured brings back fond memories it was where all the plates,bowls and all the stainless steel lids for the plates/bowls where washed. There was a large hobart conveyer dishwasher that stood to the left,the extractor still remains.The large waste disposal and large double sinks have been removed.Also the windows in the left of this picture would look into the butchery area.

The main kitchen area is where all meals were prepared, cooked and served. The remains of the deep fat fryer extraction system still hangs from the wall(underneath the far windows).The large open gap in the wall was a cool room,where sandwiches,salads etc where made in a cold enviroment.The ironmongery you see on the floor that resembles a cross,has been ripped out of the floor,these are drain channels that ran along the bottom part of the kitchen and floor standing (steam) boiling pans would empty in to these.The far left of this photo shows the remains of the oven (Blodgett) extractor chimneys which feed into the original chimney breast.I worked in this kitchen from 1989-1996 its very sad to see the state that it has now become.

Also pictured is one surviving oven, hot trolley whatever you want to call them. Each ward had its own and was numbered accordingly. The compartment furthest left was infact the cold section (some models had it in the centre) where sandwiches, salads, milk, bread and cold desserts and fruit would be placed. The other two sections were the hot compartments where plates would be stacked on top of each other with a lid inbetween. 18 plated meals and 12 pudding bowls was the maximum that could be placed inside each one. The compartment on the top right was also a hot section that was hinged and would open out and used to serve off, there was then like a well that containers usually soup, gravy would be put. There were smaller models that only had two compartments that were only used on the outside wards (Kingsdale House, Kanner Unit, Linton House) due to the fact that they were transported by a van and four would be the maximum it could carry.