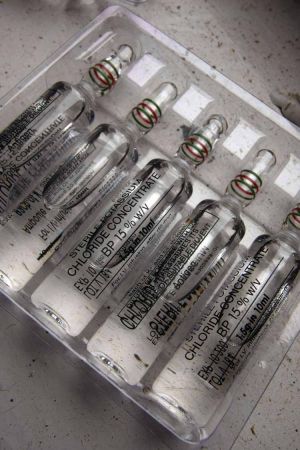 We were fortunate to obtain a copy of the case presentation from 1970, reproduced left, given by:-

It is a valuable insight for those of us not normally privy to such matters and makes very interesting reading. Notice that the copy, reprinted from the Yorkshire Faculty Journal, is signed by the man himself.

John was educated at the City Of London School and London University.

In 1937 Todd was awarded the Tanner Prize for Obstetrics and Gynaecology, Kings College Hospital, London. He was Consultant Psychiatrist, High Royds Hospital, Menston, West Yorkshire, from 1955 to 1979.

Bibliography Of Papers and Works, (written or contributed to) By Dr Todd:

The Doubleâ its Psychopathology and Psychophysiology.

Syndrome of Alice in Wonderland.

The Othello Syndrome:a study in the psychopathology of sexual jealousy. Jointly with Dr.K.Dewhurst.

John Todd was the first to name the Othello Syndrome.

The psychosis of association: “Folie a Deux”. Jointly with Dr.K.Dewhurst.

The Significance of the Doppelganger (hallucinatory double) in Folklore and Neuropsychiatry.

The Bronte Children-aspects of their lives of medical interest.

The Syndrome of Big Brother.

The West Riding Asylum and James Crichton-Browne 1818-1876. Jointly with L.Ashworth.

The House. Written with L.Ashworth. 1993. Printed by Double “S” Printers, Bradford.
A history of the Wakefield Asylum

A Description:
A psychopathological syndrome of distorted space, time and body image. The patient has a feeling that the entire body or parts of it have been altered in shape and size (metamorphosis), associated with visual hallucinations.

Psychoanalytic interpretation by Todd has made more understandable and plausible the illusionary dreams, feeling of levitation, and alteration in the sense of passage of time that Alice experienced. Alice trod the paths and byways of a wonderland well known to Carroll, her creator, who suffered severely from migraine. The majority of patients have personal or family history of migraine.

In Lippmans report, one of the patients stated that she felt short and wide as she walked, calling this a â€tweedlike dumâ€ or â€tweedle deeâ€ feeling. Associated disorders may include apraxia, agnosia, language disorders, feelings of  dreamlike or trancelike states, and delirium.

The disorder was first described in 1955 by the English psychiatrist John Todd (1914-1987), who named it for Lewis Carrolls Alices Adventures in Wonderland.

The Cheshire Cat syndrome is another medical eponym taken from Alice in Wonderland. It was first described by the British physician Eric George Lapthorne Bywaters (born 1910) in 1968.

A Cause of Inferiority Feelings and Morbid Sexual Jealousy

Morbid sexual jealousy has been defined, and references to the relevant literature have been made. The factors which predispose to morbid sexual jealousy have been outlined, and attention has been drawn to an additional predisposing factor, which has received little or no attention in the past. Case histories demonstrating the role of this additional predisposing factora real or imaginary smallness of the phallus have been presented.

The notion prevalent among men that a relatively small penis is a sexual handicap has been discussed, and the likelihood has been stressed that this notion is illusory.

Also shown are Dr Todd’s residence at High Royds and images of the house known as Bon-Accord, later, the Facilities Management Department. Research into drug addiction was carried out here.