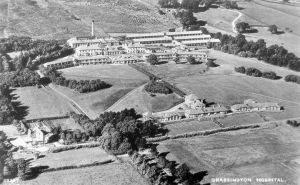 In 1919 a large area of old hay meadows alongside the Hebden Road was sold to the Bradford Health Authority and Grassington Hospital was built. At its core was a long two-storey building with rooms opening out directly onto balconies and fresh air. This was a TB sanatorium with about 200 beds and around it were accommodation for doctors and other staff. Here, adults and children from all over the north of England and beyond were sent in the hope that the pure Dales air would help them recover from the dreadful disease of tuberculosis.

With TB under the control of antibiotics, the hospital became increasingly redundant. In 1966 it ceased to be a sanatorium and instead became a Psycho-Geriatric hospital an extension of High Royds. It finally closed in 1984. It lay derelict for many years until in 1996 a developer got planning permission to demolish the hospital to make way for luxury housing. The hay meadows survived and are now cared for by English Nature and the residents.

A Hospital in the Dales

In the heart of Wharfedale – an idyllic setting on a warm summer’s day – the white walled, red roofed hospital at Grassington covers an extensive area surrounded by neatly laid out gardens, including a croquet pitch, a putting green and a bowling green, all of which are frequently used by the patients.
There is a relaxed atmosphere at Grassington and the 270 patients are encouraged to enjoy the outdoor activities and take part in the everyday life of the hospital.

Grassington Hospital came into operation shortly after the First World War. It was built by Bradford Corporation for the care of patients suffering from tuberculosis. It continued under their management until 1948 when the State took over all hospitals. The beds at Grassington continued to be occupied by T.B. cases from a wide area, under the authority of the Middleton and Grassington Hospital Management Committee. Subsequently as means of controlling T.B. became effective, the demand for beds dropped and a number of geriatric patients were admitted.

About this time, Grassington Hospital was taken over by High Royds Hospital Management Committee and most of the patients being cared for at Grassington were formerly at High Royds. The Matron is Miss. S .Kemp and the two Nursing Officers, Mr. W. Fowler and Mr. E. Brogden who, together with Mr. J Rawlings, who recently moved to Uxbridge, are very largely responsible for the relaxed and happy atmosphere.

There is a brisk, social life. With the help of volunteers – an invaluable service – the patients take part in the activities of Grassington’s Over 60’s Club who, for instance, not so long ago kindly paid for ten of the patients to enjoy an excursion to Bridlington. They are invited to attend the various productions of Grassington Dramatic Society. In fact the relations between the village and the village and the hospital are excellent. Again, with the help of voluntary assistance, a library service is provided and many patients take full advantage of this.

At one time there was talk of selling the former Medical Superintendent’s house, known as Keat’s House. But it now enjoys a new lease of life. It has been modernised and redecorated and is the home of 14 men. If you think men cannot run a home, then you must meet Mr Harry Shuttleworth who acts as housekeeper to the other 13, who live together, supervising themselves and working a 31 hour week around the hospital estate. They have complete freedom and regulate their own lives, but come to the new central dining room for their meals. They can come and go – often to the Grassington local as they please and they all seem to have found great satisfaction in their new freedom.

Under the active encouragement of Miss Kemp, patients are encouraged to spend time in all kinds of therapy. With such a large number of patients it might be easily assumed that each patient quickly loses his or her identity. But it is very noticeable how the staff have gone to great pains to preserve the individuality and identity of each person in their care. The ambulant patients who are capable , to a large extent, of caring for themselves are given separate rooms, almost like flats, all of which have a different appearance in the way of décor.

Throughout all the wards there is a cheerful homely atmosphere which has been added to by brightly coloured curtains and furniture. The latest décor can be seen in the redecorated wards C, D and E and the Hostels.

In all, there are about 100 nursing staff, both full time and part time, not to mention the kitchen staff who have the taxing task of preparing meals for staff and patients.

The old staff and Patients Dining Room have been knocked into one to make a large dining room for about 100 patients. The room is large and airy. It is almost complete but needs its interior furnishings. This new dining room will help to get the patients away from the wards for meals and a change is as good as a rest.

Also, after many months, the new Staff Dining Room and half of the new kitchen has been opened. The dining room has been converted out of the old, disused, Mess Room. The walls have been decorated in a plain light blue paper, the carpet is royal blue and the upholstery and curtains a light amber.

One can imagine the care and thought which has gone into the new arrangements and congratulations are due to the contractors and Mr. Gordon and his kitchen staff.
Should any of the Nursing staff at High Royds wish to pay a visit to Grassington Hospital, I know Miss Kemp would be only too pleased to show them round.

The following recollections were kindly donated by Anne Jones nee Capstick, who worked at Grassington Hospital in the early 70s. Anne would be delighted to hear from anyone who remembers her: she can be contacted via ajones@ajfinancial-services.com

“We had one patient, at Grassington Hospital – her name was Esme, and she sometimes believed she was married to a ‘Mr Johnson’. Esme asked any nurses who were around to ‘join her and Mr Johnson for tea and a cigarette’!!!!! Yes, patients smoked on the ‘wards’ as did nurses! Most of us played along with Esme talking to Mr Johnson as if he really was there and asked questions about him and she would then ‘ask her husband and get back to us’. If anyone insinuated she was talking rubbish (which unfortunately some did) and told Esme she did not have a husband she then collected her handbag/cigarettes and any other possessions she could find and attempted to march off the ward muttering under her breath that her and Mr Johnson were leaving! Naturally we had to bring her back onto the ward but on one occasion she did go missing and in fact my Father who drove the hospital minibus, found her halfway to Grassington, talking of course to Mr Johnson!

I remember another patient, again at Grassington, and I think her name was Minnie. I encouraged Minnie to do odd jobs around the ward and in the ward kitchen which she was really happy to do. I ‘paid’ her with talcolm powder/bath salts – that kind of thing that I had been given at various times and she seemed delighted. I thought her ‘volunteering’ was becoming extremely regular and only when I went down to work on her ward where some patients had their own rooms did I find she had a ‘shop’ going on selling my items for cigarette money. I don’t think there can have been too much wrong with her, do you? In fact, I think the only ‘problem’ with Minnie had been that she had a baby out of ‘wedlock’ years before and had been institutionalised as a result !! Yes it did happen!

Another time at Grassington Hospital we were overlooking a few patients who were quietly talking amongst themselves and knitting and I turned around just in time to see an ash tray flying through the air directly at my head – managing to duck in time – you never knew what was going to happen!”