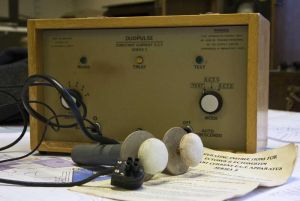 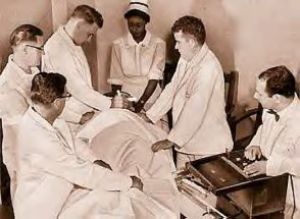 The story of electroconvulsive therapy (ECT) began in 1938, when Italian psychiatrist Ugo Cerletti visited a Rome slaughterhouse to see what could be learned from the method that was employed to butcher hogs.

In Cerletti’s own words, “As soon as the hogs were clamped by the [electric] tongs, they fell unconscious, stiffened, then after a few seconds they were shaken by convulsions….

During this period of unconsciousness (epileptic coma), the butcher stabbed and bled the animals without difficulty….

“At this point I felt we could venture to experiment on man, and I instructed my assistants to be on the alert for the selection of a suitable subject.” Cerletti’s first victim was provided by the local police – a diagnosed schizophrenic with delusions, hallucinations and confusion.

After surviving the first blast without losing consciousness, the victim overheard Cerletti discussing a second application with a higher voltage. He begged Cerletti, “Non una seconda! Mortifierel” (“Not another one! It will kill me!”) Ignoring the objections of his assistants, Cerletti increased the voltage and duration and fired again. With the ‘successful’ electrically induced convulsion of his victim, Ugo Cerletti brought about the application of hog-slaughtering skills to humans, creating one of the most brutal techniques of psychiatry.

In ECT, 180 to 460 volts of electricity (the current is between 750 and 900 mA) are fired through the brain, for a tenth of a second to six seconds, either from temple to temple or from the front to the back of one side of the head. The result is a severe convulsion, or seizure, of long duration, as in an epileptic fit. The usual course of treatment involves 10 to 12 shocks over a period of weeks.

For some, the experience is traumatic and devastating, while for others, it is a blessing and a salvation.