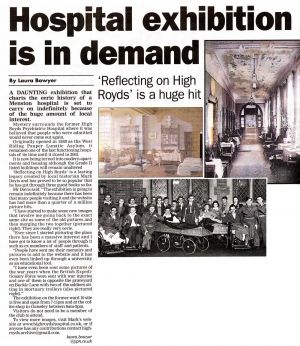 The  hospital’s clubhouse was opened in 1971, but some of the sports teams were originally set up for staff in the early 1900s

Highroyds Social Club. Good quality cheap beer and food, members required to keep this local club going. Friendly atmosphere, all welcome. The food is home cooked traditional meals at very good prices. The club has a very large dance hall for hire. The club is located at the rear of the new development at highroyds

Club to operate from an old ward

A FORMER psychiatric hospital ward is to play host to a long-running sports and social club as it patiently awaits its new home.
High Royds Sports and Social Club is about to move into what was once Ward Ten of High Royds Hospital — and latterly a training area — as the diggers move in on the clubhouse members have occupied since 1971.

The club was originally set up for hospital staff, their friends and family members, in the grounds of the old Victorian asylum.
The hospital closed in recent years to make way for what is to be a major housing development.

Part of the deal for the site includes a new clubhouse for High Royds Sports and Social Club, but as this may be one of the last buildings to go up on the site, members could spend three years socialising in the former hospital ward.

The club was recently contacted by the developer, telling members they had to be prepared to move within weeks.
Work is now said to be feverishly taking place to get Ward Ten up to scratch, but the club is unable to confirm when it will be running in its temporary home, as the ward will require health and safety checks and the granting of a new licence to serve alcohol.

The developer is said to be spending tens of thousands of pounds on fitting out the former Ward Ten, complete with a bar and many other facilities.

Club secretary, Tom Booth, is keen to encourage not only the regulars, but also old friends, former hospital staff and members who have not attended recently to come to the event.

As well as catching up with old workmates and other members of the community which once centred on the large hospital, visitors will get a chance to look at the architects plans for the new club building.

Menston club left without water as thieves twice steal pipes
From the archive, first published Thursday 13th Sep 2007.
Thieves have left users of a popular social club in the cold after stealing copper pipes used for water and heating.

Staff at High Royds Sports and Social club, Menston, were left without running water when thieves broke down a cellar door leading to the boiler room and stripped the hot water system.

Two days later they broke in again wrecking the entire heating system as they pillaged.

The club, which is privately owned, is located in on old wing of the former psychiatric hospital, High Royds, currently being converted into housing by developers Gladedale Yorkshire.

The first staff knew about the theft was when they attempted to turn on the water and realised that the taps were empty.
They contacted the on-site manager acting for Gladedale who went to investigate the cause and it was then that the discovery was made.

Secretary of the social club Tom Booth said: “It’s disgusting. To steal the pipes once was bad enough but to return a few days later and do it again is just heartless.

“The club is used by all sorts of different groups and is more and more becoming the heart of the community.
“These thieves have caused chaos for the club. It’s a disgrace that people can be so heartless.”

The social club is used by a number of local organisations including a snooker club, line dancers, swing dancers, a darts club, indoor bowlers and a dog-training group. It is also used for christenings, birthday parties and retirement celebrations and is popular at the weekend with parents whose children can play in the function rooms while they socialise.

Mr Booth said: “The club is growing in popularity as more and more people move in to the area.
“Now we have no heating and are coming up to the cold weather. We have children who use the facilities at the weekends and we can’t afford to leave heaters lying around while they play.
“The developers were very good and responded right away when we had no water but we are still without heating at the moment.
“These things take time to sort out and people responsible for these thefts have caused chaos for the club. It’s a disgrace that people can be so heartless.”

A spokesman for Gladedale Yorkshire said they had sent a plumber round the site following the original theft. He added: “We are unaware of any ongoing problems with the heating system but will immediately investigate the situation and take any action required.”

The thefts follow a spate of similar incidents in Otley last month where brass plaques were taken from war memorials in the town.
Our investigations show that copper can fetch up to £2,000 a tonne.

A police spokeswoman said: “This is a problem not just in the Menston area but also nationally due to the price of semi-precious metal increasing.
“We would urge people to be mindful of the security of their property and our Neighbourhood Policing Officers can also offer crime prevention advice.
We would also appeal to scrap metal dealers to contact us on 0845 6060606 if they are approached by anyone selling scrap metal that they suspect not to be bona fide.”

Let it go, let it go
Cos no ones gonna tell you but a friend
He’s gone and he is gone and everybody went along
And nobody was left here in the end

Got news from Uncle Hew
Through a second cousin ??
Too late there’s a housing estate
It’s called Highroyds